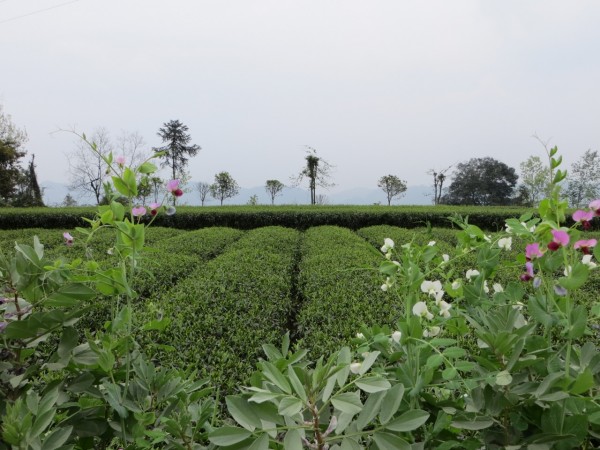 Over ten years ago now Jasmin began his annual China tour in province of Szechuan. He began in Ming Shan, a small town at the base of Meng Ding Mountain, the original source of one of China’s famous yellow teas: Meng Ding Huang Ya. He had only 2 days allotted for the task and spent them very busy visiting tea-makers, tea factories and tasting many teas before finding a tea producer and quality he was very happy with.

As tasters, setting up a new tea, we will often visit many producers to evaluate their fields and factories, and taste their teas.  This helps the development of the essential grading techniques we use as taster-buyers. It also allows us to understand the variables of the flavour-profiles and transformation techniques specific to this tea and how the 2 relate to each other as the teas are made.  In this particular case, having visited 5 factories in record time, it was the first one Jasmin had visited that he selected. A beautiful clean factory, a great connection with the producer and his manager and, needless to say, the best tea.  To top it all they prepared the green and yellow teas for him in a gaiwan with water that was not at boiling point!  Unusual presentation when you are comparative tasting in China, to say the least.  It then remained to agree on prices which, as always in China, were relatively high.

Jasmin thus had a great opportunity, during this visit, to delve into the subtleties of yellow tea manufacture and the technique of smothering the leaves two or sometimes three times in a paper wrap.  The result being a tea without bitterness, light vegetal notes cacao aromas and a sweet finish.

Though their yellow tea, the Meng Ding Huang Ya, is the most famous tea in the region, the biggest production for the local market is a green tea called Meng Ding Gan Lu.  Back in 2012 Jasmin tried many grades, selected one and the Meng Ding Gan Lu was first added to the catalogue.  It has a fine twisted leaf with vegetal and fruity notes, making it perfect for lovers of Bi Luo Chun.