Drinking Tea in its Prime 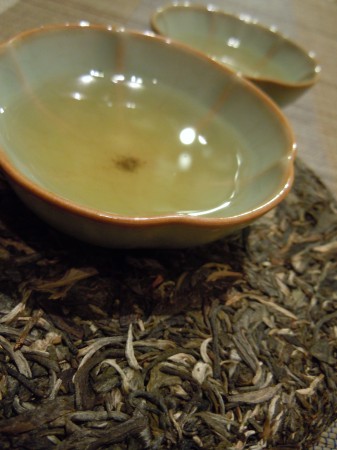 Let me play devil's advocate with respect to my previous article, here I will describe the unusual freshness of some young Pu Er. With the exhilarating arrivals that Jasmin has brought from Yunnan and Laos you can't blame me. In fact, for three new sprightly young teas, with such abundant aromas and liveliness, I say to hell with the waiting - taste these young sheng Pu Er in their prime!
Although these teas are usually destined to age and transform over time, there's nothing to stop us from enjoying the extreme youth of this year's Pu Er. We discover surprising aromas, fruity, floral camphor, and so on. Especially since the producers in Yunnan have made such marvellous progress in their manipulation and transformation of leaves that we should re-evaluate our approach. Between 2009 and 2011, in only two years, Jasmin has observed the evolution of taste and skill of the artisans of Pu Er and it would be a shame for us to continue to believe the dogma that states 'Pu Er is only good when old'. Tasted in a Gaiwan, highlighting volatile fragrances, these teas offer countless infusions with a strong persistence.

Enough talk, now to move on to some presentations of new Sheng Pu Er adorning our menu.

Pu Er Yibang Malishu 2011: From one of six legendary mountains producing Pu Er, this cake is pressed from leaves from a single terroir, in other words, the village of Malishu (whereas usually for Pu Er, the leaves may come from different origins). The uniqueness of this tea comes from the organic material of its composition. The vast majority of Pu Er teas are created from var. assamica tea with large leaves (Da Ye), compared to Yibang Malishu, which contains only leaves of 150 year old var. sinensis tea trees, which is very rare in the area of Pu Er!

Pu Er Banpen Maocha 2011: This Maocha seems designed to be tasted also: young, lively and incredibly aromatic. It was cultivated in the village of Banpen located just a few kilometers from the famous village of Banzhang whose reputation continues to grow (which unfortunately leads to a dramatic rise in prices of teas from the terroir). An interesting technique to make the taste of this tea even more enjoyable is a generous weight of leaf in a Gaiwan (approximately 5g) then infuse with water at 90 degrees. When you transfer your brew into your cup or pitcher, take care not to shake it at the end so as not to remove the fine hairs covering the leaves, the liquor obtained will be clearer, less astringent and more flavorful.

Laos Phong Sali 2011: A small wonder from a terroir never previously explored in our selection, this tea cake, very similar to Yunnan Pu Er, was made from leaves of tea plants more than a century old. A rather full-bodied curiosity which can be both tasted now and whose future with ageing is promising. Laos is located about ten kilometers from Yunnan, it is not surprising that the method of manufacturing tea there is very similar. This country actually has a long history in regard to tea, a history which has regrettably been lost over time and which is just beginning to bloom again. Also, since Phong Sali 2011 was not produced in Yunnan (which explains why, theoretically, it cannot be called Pu Er), it is not part of the immense surge of interest for Pu Er that engulfs the Chinese tea market, which accounts for the ridiculously low price for a cake of such excellent quality!