From North Lac Saint-Jean to your cup: A new grade of Labrador tea 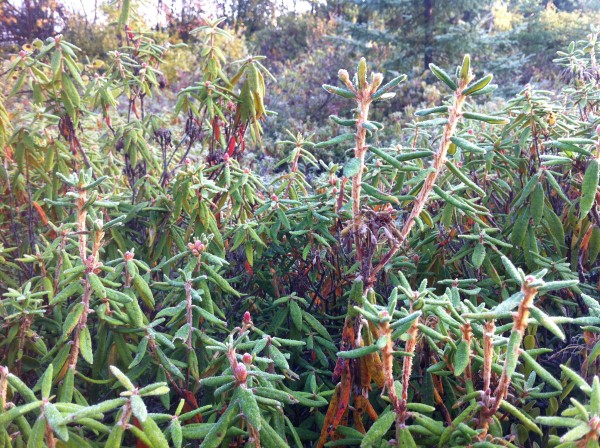 A new grade of Labrador Tea has been added to our menu which comes from Lac Saint-Jean (north) in Quebec. Unlike the regular Labrador Tea which is harvested from boggy land under forest cover, the grade 1 tea comes from moorlands where the leaves are exposed to the hot sun. The plucking is also different: the regular comprises only quite mature leaves whereas grade 1 contains only the stem and tiny leaves.

The presence of stems may seem surprising at first, especially in a herbal infusion. However, they will be increasingly used in the future due to a high concentration of ursolic acid, a compound found in many fruits and used as an anti-tumoral in traditional medicine. This discovery was recently made at the Laboratoire d’analyse et de séparation des essences végétales (LASEVE) at the Université du Québec in Chicoutimi (UQAC).

Its Virtues: The advantages imparted by the stems adds to a  long list of the benefits in Labrador Tea: its essential oil is considered anti-inflammatory, antispasmodic, antibacterial, decongestive and effective in treating various broncho-pulmonary ailments (not surprising that many first nations have used this to fight off colds and flu), Labrador Tea is also known for its calming and slightly soporific effect, helping to combat insomnia and anxiety, it is also recognized to have the role of draining the liver and of regenerating liver cells (some even claim that an infusion of Labrador Tea can soothe a hangover!), lastly it can be a digestive, ameliorate the menstrual cycle and help during labour for women about to give birth.

Due to a rich tannin content, high doses or prolonged brewing may cause cramps and upset stomach. So it is best not to steep it for too long and to ration its consumption. It is not recommended for women pregnant for six months or less or children under six.

A grade of high taste potential: Another  benefit of Labrador Tea is its exceptional taste, the Grade 1 is quite surprising in this respect. Its taste is more pronounced, well structured and releases aromas of balsam fir and scents of lime. Refreshing and simply delicious.
Search around on the web and you will find many food recipes that incorporate Labrador tea, especially with wild game, in place of the mint in spring rolls, and even to replace vanilla essence in desserts!
Share your feedback on any recipes you have tried. Why not try the two grades comparatively and let me know how that goes!
Enjoy your  tasting!
Kate

Labrador Tea, or Greenland Ledon, is not related to the tea plant, but its therapeutic virtues are sought after, just like those of Camellia Sinensis. This wild harvest comes from areas of the wetlands of Lac St-Jean where the plant is exposed to the warm rays of the sun.