In Search of the Tai Ping Hou Kui 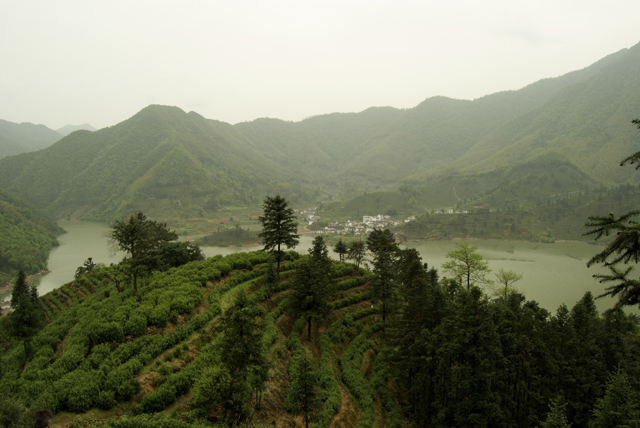 Every tea taster dreams of one day discovering a virtually inaccessible tea plantation in a remote region, where an exceptional tea is produced. The discovery of the Tai Ping Hou Kui was an experience of this order for us.

Since our very first explorations this tea had been on our list of “wanted list”. We knew of its reputation and province of its cultivation, but we continually returned empty-handed from our searches. Only having finally located these lost producers, thanks to Mr. Xie a friend from Huang Shan Mao Feng, did we understand why it had been so difficult: there are no roads leading to the gardens of Tai Ping Hou Kui!

Leaving Mr. Xie’s place in magnificent Anhui province, we had to travel for several  hours on country roads before stopping on the banks of a river. Then it dawned on us that the plantations are not accessible by car and that the rest of the journey would be by boat.

The calm waters of the river mirrored the majestic Huang Shan mountains surrounding it. Having navigated through this spectacular landscape for about an hour we arrived at the sloping fields of Taiping Hou Kui, one of the most beautiful sites we’ve had the luck to visit in all our years of exploring. The scatter of small tea gardens along the riverside gleamed in an imperial green.

Mr. Ye, the producer we met there, belongs to a long line of producers who have cultivated tea for over five generations. His ancestors planted the tea trees in his garden.  Like the other families from the village, he works in a small factory behind his house. He produces a tea that is characterized by its flattened leaves averaging about 6 cm in length. To achieve this remarkable result, Mr. Ye uses an artisanal method of transformation that completely astounded us. 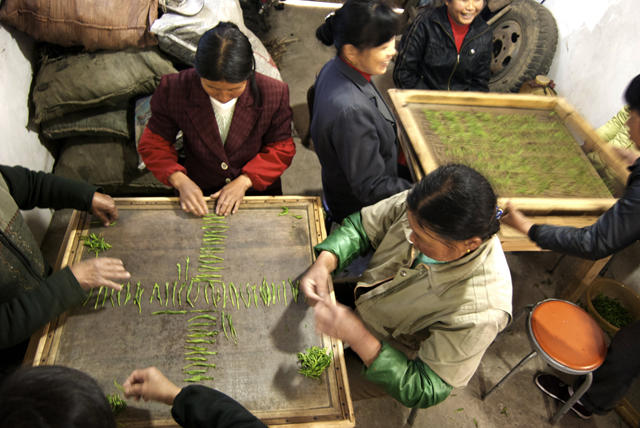 The cultivar used for the production of this tea has large leaves each are rigorously selected and plucked. As with other grands crus, only the terminal bud and the two first delicate leaves on the stem are used. However, for the Tai Ping Huo Kui, they are allowed to mature a little longer.

Once plucked, the leaves are sorted and manually fired in a pan for about five minutes.

Rolling is the next step, where the leaves are laid on a fine metal grill one by one in such a way that they don’t touch. A second grill is placed over the leaves. The grills are then put on a wooden table, a cotton cloth laid over the frame and a hand-held roller passed over the grill in a brisk movement.

The leaves are then left in this frame for the final drying over a wood fire. The gradual drying lasts about one hour.

Due to this entirely manual transformation method and the terroir’s small cultivation area, authentic Tai Ping Hou Kui teas are rare and, even in China, hard to find. Because of its rarity and the originality of its trademark floral aromas the Chinese will often offer this tea as a gift.

These long mature leaves undergo a unique transformation in their home of Hou Keng village.