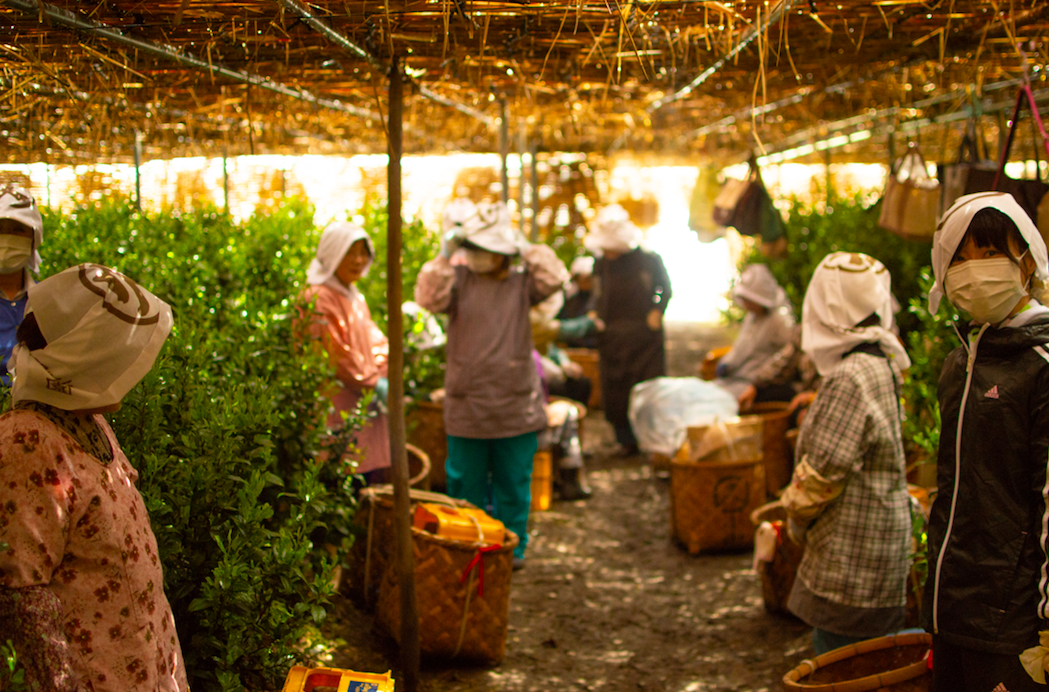 Japan’s development is an intense story from the feudal era of samurai and geisha to the hyper modernization of the present day. As with the Japanese socio-cultural situation and economics, its tea industry has been evolving rapidly too. For over 15 years now, our travels to this surprising country have allowed us to witness this constant transformation. This article runs through a quick timeline of the industry, from its humble beginnings to its modern developments.

Tea was first introduced to Japan during the 8th century.  Monks sent to China as part of their Buddhist training carried back some of the leaves they have been drinking abroad. Its consumption gradually spread through the monasteries of the country. At the turn of the 9th century, the first Camellia sinensis seeds were planted in Saga prefecture, Kyushu Island, and Japan’s first tea garden was born. During these early days and for the next 4 centuries, tea was mostly used by monks to help them in their meditation. The rest of the market remained marginal. Then, during the 13th century, a monk named Eisai helped the first wave of tea's popularization by introducing a new way of preparing it: ground into a fine powder and whisked in a bowl with a bamboo whisk. The ritual aspect of this style of preparation gave birth to the Tea Ceremony, a more spiritual approach to the tea moment and space, still observable today in Japanese culture.

Around this time Japan’s isolation policy came into force and the country became completely closed to the outside world for over two hundred years. In 1853 Commodore Perry took on the blockade by force and opened the country marking Japan’s introduction to international trade. The tea market finds modest success with its green leaf teas (called Sencha) while powdered tea (called Matcha) remains a product for the domestic context of tea ceremonies. Inspired by China, India and Sri Lanka who dominated global markets at that time, Japan also tries its hand at black tea making. Unfortunately, the high costs of labour and production, as well as the absence of expertise in the domain make it impossible for the country to compete with the British colonies. The black tea enterprise withers and eventually disappears. Green tea production, however, has increasing success in the international market place. As international trade develops the domestic market also goes from strength to strength as the Japanese public becomes avid tea drinkers.

In more recent years another crucial shift in the Japanese tea industry was due to the increasing popularity of coffee and ready-to-drink beverages being introduced to the country. These encroaching markets expanded dramatically in the 1980s causing a substantial decrease in loose leaf tea consumption throughout the archipelago. As the local market regressed, production lost its momentum. The industry has no choice but to adapt to survive and is kept alive by big distributors of ready-to-drink bottles across the country. Large scale distribution of bottled teas encourages the production of standardized volumes while discouraging small, specialized batches. In our early days as buyers in Japan (in the early 2000s) good quality Japanese teas were some of the most expensive in our catalogue. Today, their average prices are lower than Chinese teas which continue rising in price and status with the strength of the Chinese economy. The relatively small domestic demand for Japanese loose leaf teas combined with their rapid mechanization resulted in a stabilization of prices for the export market.  Currently, Japanese teas offer excellent value-for-money ratios while future generations of farmers seem less and less interested in its culture and manufacture. Fortunately, there is still a core of tea farmers working passionately to produce higher quality, premium teas. Inspired by such efforts, some organizations have set up contests and competitions to promote Japanese teas. This focus on quality is slowly making it onto the global scene, though the principal selling point for Japanese teas in foreign markets remains a focus on their health benefits for now.

A Surge of Passion

With Japanese people still showing little interest in drinking loose leaf teas, an increasing number of producers turn towards international demand which, fortunately for them, continues to grow. Ironically this export market place is better suited for specialty products than the country’s domestic market. New developments are slowly changing the landscape of Japanese tea production and as new market possibilities present themselves to growers they react by refining and developing products. New cultivars are bred and old traditional plants and techniques revived.  With these green tea developments came the natural idea of experimenting with black, white, wulong and even fermented teas. Though results are varied, these ‘work in progress’ teas shows exciting potential for the future.

The other tea phenomenon taking the tea world by storm is Matcha. No longer for the exclusive use of tea ceremonies, its numerous health benefits have pushed it to the forefront of new markets geared towards well-being rather than tasting. Over the last decade, its popularity has continued to increase and shows no sign of slowing down. A few years back, its production was limited to “specialized” regions in Japan (mostly Uji and Yame). Today, Matcha facilities are found across the country, and even beyond. With all the publicity around this product, developments will most likely still continue in this sector in the years to come.

We feel very privileged to be experiencing the evolution of these events so directly from the inside.