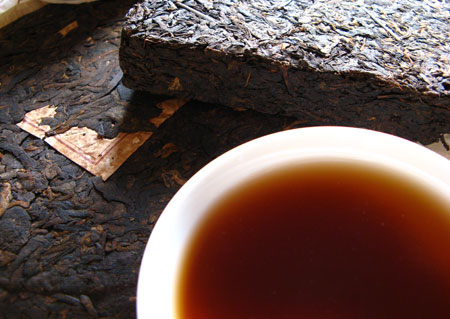 In recent years, we hear more and more about green teas and their value – being particularly rich in polyphenols - as substances researched in the field of prevention of various cancers. Unfortunately, we sometimes forget a family of tea which is just as important to health, Pu Er, which, since the Tang Dynasty (618-907), has been one of the most important medicinal ingredients of the Chinese pharmacopoeia. Although I agree this is a subject that could fill a book, I shall today just briefly summarize the main health virtues of these delicious teas.

Even though we can use Pu Er tea externally to treat burns and bruises, it is mainly internally that it is of medicinal benefit (with a great taste of course!). Among its many qualities, it is mostly for its properties of reducing excess fat and bad cholesterol that some glorify the dark leaves of this family of tea. Indeed, it would be the most potent tea at this level, making it the champion in the fight against cardiovascular disease. In the past, several studies have shown the great slimming power of Pu Er. It seems it can also tonify liver metabolism (it is also very effective in recovering from the excesses of alcohol and over-consumption of rich food ... The holiday season is coming, make sure you have some in the cupboard! !) and the immune system, promote detoxification and purification (helpful in fasting and dietary treatments), fight against multiple infections (bacterial) and circulate the vital energy (Qi) in the body. In addition to treating gastrointestinal disorders (including diarrhea), it can likewise treat mild depression, the latter sometimes associated with intestinal disorders and an imbalance of yin / yang ... which Pu Er also has the ability to harmonize.

And that's not all! In addition to these multiple medicinal properties full of promise of well-being, Pu Er conceal tastes and aromas like no other type of tea: notes of minerals, farms, earthy-ness, old wet wood, humus, peat ... a rustic and comforting character, perfect for the coming cold season. These teas keep almost indefinitely, are very generous in reinfusions and are easy to brew in a large pot, or in a zhong or a gong fu cha pot, in addition to having a relatively low caffeine content (especially for shou Pu Er).

I can already hear the question that resonates in the minds of many of you, "Yes, but does sheng have the same properties as shou?”
"Yes”, but only when they are ripe, fully fermented (and oxidized). That's when the members of this subfamily of Pu Er win on all fronts, both in taste and in their properties (becoming so low in caffeine). I also heard from several experts that it is not advisable to consume a lot of young sheng Pu Er (under 10 years of age) due to the risk of experiencing stomach problems from the "greenness" of these "immature" teas. Though they are already very interesting tastes, it may just be good to know that it is especially sheng Pu Er over ten years of age and shou Pu Er of any age, (since it is artificially forced to be mature in a few months during their production) that more specifically provide the benefits mentioned above. And it goes without saying that the qualities and grades of leaves, within this large family of tea, will vary from one recipe to another, from one year to another.

Next hangover or stomachache, not that I wish that on you, try testing some Pu Er when you make a nice pot of tea ... and give us some news!