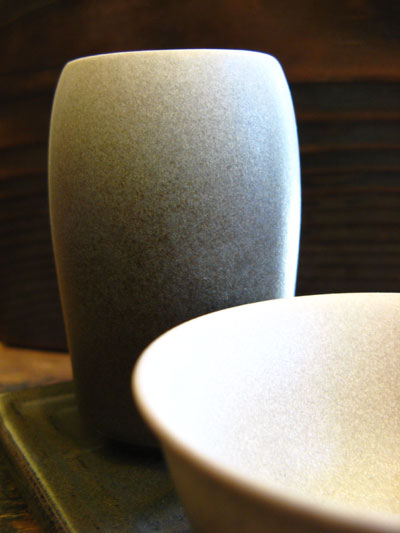 When visiting a tea house to enjoy a wulong tea in the gong fu cha style, more than likely you will be presented with a tray holding a small Yixing clay teapot, a pitcher (cha hai) and two cups, one low and wide and one taller and narrow. The wider cup or "taste cup" (bei cha) is usually a familiar sight. It is the taller, or "scent cup" (wen xiang bei), which can be a surprise. This pair is in fact the ultimate tool for assessing the most aromatically complex teas. 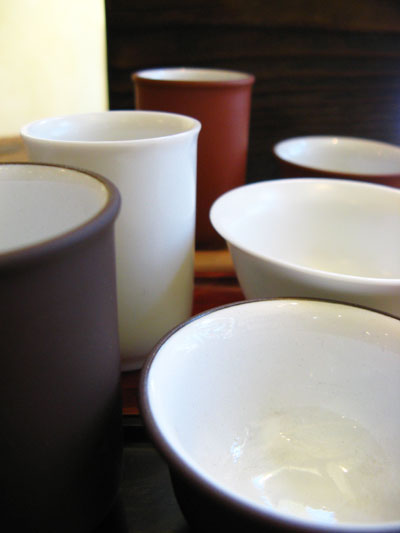 This duo of cups, originating in Fujian in mainland China, have been in use for over 30 years in Taiwan, where they are used to taste the best wulong teas. They are also sometimes used for tasting Pu Er, enhancing the exposure of the rich aromatic elements.

The liquor is first poured into the pitcher to halt the infusion, and then shared amongst the scent cups. After a few seconds, the taste cup is laid, cover-like, upside down on the scent cup then quickly flipped over. The scent cup is then gently lifted to allow the liquor slide into the taste cup. This is the moment, with the scent cup freshly emptied and cooling, that the aromatic elements remaining on the walls of the scent cup release sweet and heady fragrances.Inhaling this over 20 or 30 seconds reveals the aromatic evolution that emerges. A Shan Lin Xi, for example, can have aromatic waves of ripe pineapple followed by the scent of crème vanillée, and then melted butter, returning to pineapple before delicately vanishing into sugar candy.
The use of the scent cup permits an aromatic 'dissection' of the liquor and brings an extra dimension to the simple to use of retro-olfaction to perceive the flavors. And of course, we must not forget that after this focus "on the nose", there remains the pleasure of the liquor waiting patiently in the taste cup: appreciate its texture, flavors, passing aromas, persistence, and ultimately, its overall effect.
The use of scent cup is of most interest for the first three infusions of gong fu cha, called "the infusions of aromas." The next three are called the "infusions of flavor" and the last three "infusions of colour" (or "essence / purity") and generally, do not require the taste cup.