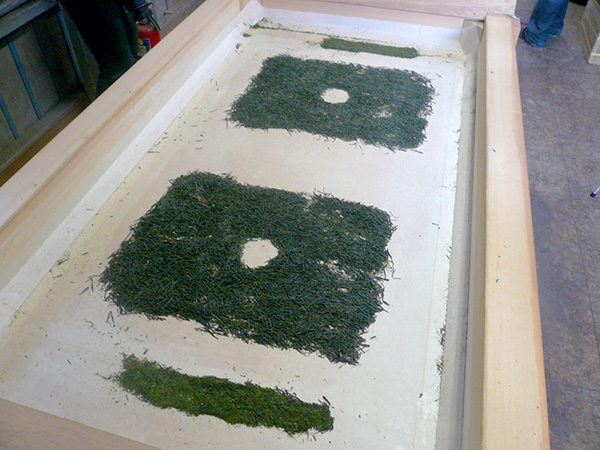 Our first Japanese adventure in 2011 begins with learning temomicha, a traditional artisanal technique. It is a process kneading and rolling the tea leaves by hand. Hugo and I were both fortunate and privileged to be guests of Mr. Miyano for a crash course in this technique, which he has practised for 12 years. It is interesting to note that this tradition is only practiced by a small minority of producers in an effort to preserve it. Temomicha not even known among the Japanese population.

We arrived at Mr. Miyano's, after brief greetings with the family, a cup of tea and presto! ... We suddenly have a handful of leaf. This unusual technique all happens on a wooden table, gas heated, on which was placed an oiled paper. We rolled the leaves by hand on this table for several hours. The leaves we used were picked in early May, steamed for about 30 seconds and immediately frozen for future use. Using a series of movements, the rolling starts smoothly and becomes more vigorous to finally produce very long thin needles. This rolling by hand on a heated table has the effect of enhancing the aromas and the umami taste typical in this kind of tea. The transformation ends simply with a light drying. It is a taxing process - a closed room where the heat of the table and the constant rolling movements speedily increase body temperature! All this at a steady pace for 6 hours!

The competition level temomichas can reach exorbitant prices. The winning tea last year reached $ 12 000 a kilo! Mr. Miyano was kind enough to sell us his tea before sending it to the competition. You will have the chance to taste it at a more reasonable price. As for the batch of tea, that Hugo and I made ... well, we were pretty happy with the result. The tea needles did not reach the 8 centimeters of those of M. Miyano, but they are still very tasty. Mission accomplished!