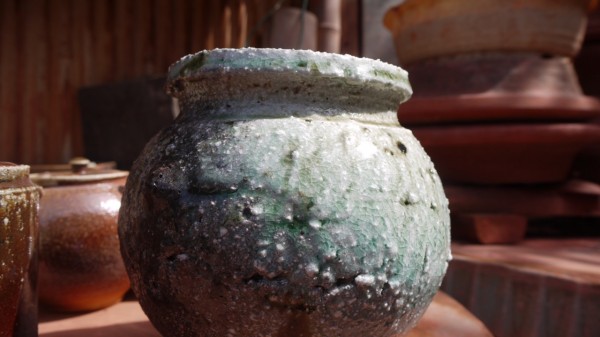 On a lovely afternoon in May we arrive in Tokoname, the peaceful coastal town that specializes in the traditional artisanal craft of Kyusu teapots. In the schedule, to visit some pottery workshops for more insight into the different manufacturing techniques of teapots and the  typical firing methods in the region, the 'mogake' technique used to obtain an organic decoration made with seaweed from the Tokoname shoreline, and the 'yohen' method from which come the famous pieces of two contrasting colours, orange red to coal black.

Mr. Yoshiki Murata is one of the potters that we had the chance to meet. He has 30 years of experience in the field and in his spare time, he likes to experiment with different kinds of clays, shapes and firings. He also exercises to develop the strength he needs to do his job and to avoid being too slim: what a character! When we visited his studio, he had just completed a one week firing in a traditional wood oven for fun and showed us the results. Fascinating, each piece a universe in itself. The ash which is deposited throughout the firing becomes vitrified forming a partial glaze where different colours appear on the pieces depending on the minerals in the clay and in the wood species used in firing. Out of curiosity, we asked what might the price be for a piece derived from such a long firing, and had to simply dream about taking them home: a few thousand dollars per piece! 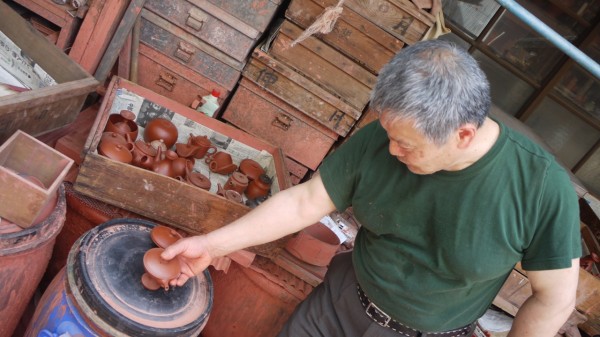 Besides his many explorations, Mr. Murata specializes in turning small teapots with various shapes and colours and of extraordinary refinement. To fashion his pieces, he uses a local stoneware clay containing high levels of iron to which he adds a pigment that also contains high levels of iron, which is called 'Bengara'. It is this pigment which gives the beautiful orange red colour  typical of Tokoname ceramics

The pieces are subjected to two firings in an electric kiln. A first at high temperature to vitrify the clay, at 1150 ° C, and a second at 800 ° C for the decoration technique with seaweed (mogake) or the primitive method done with smoke firing husks of rice grains (yohen). For both techniques, low temperature is required.

Kyusu teapots are particular in not being  enamelled so the wall is very slightly porous and can enhance infusions over time. Mr. Murata recommends black teapots for dark teas and predominantly orange red teapots for lighter teas. We will soon have some Kyusu from Mr. Murata, pass by one of our shops to see the pieces fresh from the shores of the Sea of Japan.