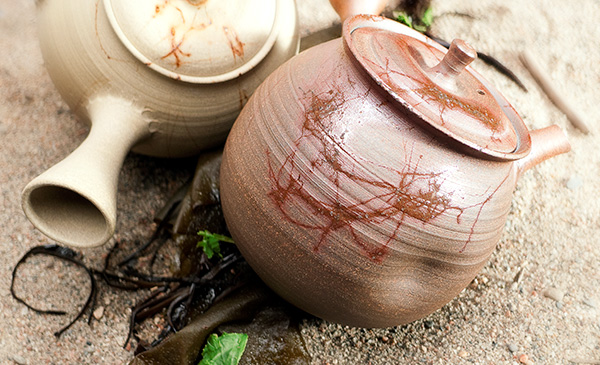 Located on the west coast of the Chita Peninsula in Japan, the city of Tokoname is the hideout of an amazing number of renowned potters, and has been for more than ten centuries. Though considered some of the oldest artisanal kilns, the origins of artisanal ceramics in this city are quite different to the current practice of creating these delicate and unique Kyusu teapots. In fact, for many centuries, Tokoname specialized in the manufacture of tiles and vases. Despite these early days barely related to the production of fine tea ware, the potters of the region, taking great care in the manufacture of their clay and their products, gradually redefined their style (and the size) of their pieces until around the Edo period (1603-1867). It was then that various efforts were made to produce ceramics for the presentation of flowers, for use with sake and, of course, for the appreciation of tea. Thanks to the friendship between a potter and a fan of Chinese Yixing teapots - the two men who brought to light the curious similarity of mineral components of the clay of Yixing and that of Tokoname. This discovery delighted tea lovers, and even more so, potters, who flocked to the region to utilise the virtues of this natural treasure which they had previously ignored.

Having become a haven for many artisans, a host of more and more impressive techniques appeared. One of them in particular, the 'Mogake' technique is impressive for its reddish motifs forming a spider web over the teapots. Shortly after the drying of the freshly molded piece, the potter attaches strips of algae to the walls of the teapot which will react with minerals in the clay during firing, leaving very unusual patterns. Other technical achievements, such as the 'Yohen' method, (which involves placing the piece on a bed of ashes in the kiln, giving the piece a particular look due to the random movement of the ash during firing), that continues to delight the eyes of lovers of both art and of tea.

These teapots are also distinguished by a double colouration which contrasts charcoal black and red-orange Tokoname clays. For centuries innumerable styles and shapes of teapots have come from these Tokoname kilns. Even today, the potters use their ingenuity competitively to provide a multitude of functional objects that have, above all, a unique and aesthetic design. If you would just like to cast an eye over some of these treasured works of art, they can be admired in our stores.