Wulong of CHINA (PART 2): THE DAN CONG OF THE FENG HUANG MOUNTAINS

Guangdong Province conceals a tea tradition of its own. Although some of the hills produce other types of tea, the speciality of this coastal region of southeast China is without a doubt wulong. Even within the same family of tea several distinct types are possible, this is even more so in the case of wulongs. Cultivated on the sides of the mountain chain of 'The Phoenix' (Feng Huang), the very special full sized tea trees, some aged over 900 years old, produce surprisingly complex teas.
It is through the genetic makeup of the tea trees, their manner of cultivationbased on age old wisdom, the type of harvest of their leaves and finally the transformation of the leaf, requiring its own very particular mastery, that  Dan Cong wulong teas divulge their differences from other members of the semi-oxidized teas.

To understand this subfamily of tea, some understanding of botany is necessary: Until recent decades tea plants were propagated only by seed. Camellia sinensis has the ability to mutate easily, each tea plant having its own genetic makeup, more or less different from that of the parents, the taste and aroma offered by their leaves varying in  sometimes surprising nuances from individual to individual plant. In Feng Huang, some tea plants with taste qualities of particular interest were pampered and even personified, sometimes by being given quite zany names. Highly regarded, these unique tea plants have survived the centuries until today when they are now almost revered by producers and enthusiasts, each tree rarely giving more than a kilo and a half of tea per year. Dan Cong means "single tea tree" since, each of these tea bushes reveal flavors of their own unique essence, and harvests are from each individual without being mixed with those of their neighbours. 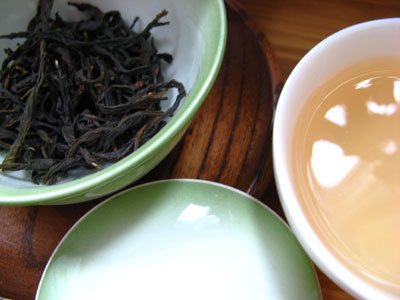 With the modern world and its demand for higher productivity, the method of reproduction changed from seeds to cuttings. Branches taken from a mother plant are rooted in a nursery then transplanted onto mountain slopes: the ideal cultivation conditions, these old tea trees were cloned in an effort to increase in their numbers and to preserve their aromatic qualities with a dependable constancy. While some of the second generation tea bushes have now aged a few decades and have become Dan Cong where the harvest is preserved individually, most of the cultivation on a larger scale will be the combined plucked harvest taken from  relatively young, identically cloned, tea plants. It is true to say that, of the teas of exceptional aromatic quality these teas are, somehow, too often ignored.

With names such as Mi Lan Xiang (honey orchid fragrance), Qi Lan Xiang (Rare orchid fragrance), Huang Zhi Xiang (gardenia fragrance) or Zhi Lan Xiang (iris fragrance), these teas are classified by the type of flavors they offer on infusion. Scores of nuances are possible, always going from flower to exotic fruit, from butter to honey, usually with an ample and sophisticated liquor, with an oily texture yet refreshing. High in aromatic profile, their infusion calls for an  awakening and opening of the senses, like a good perfume in a marvellous chemical correspondence with our skin.