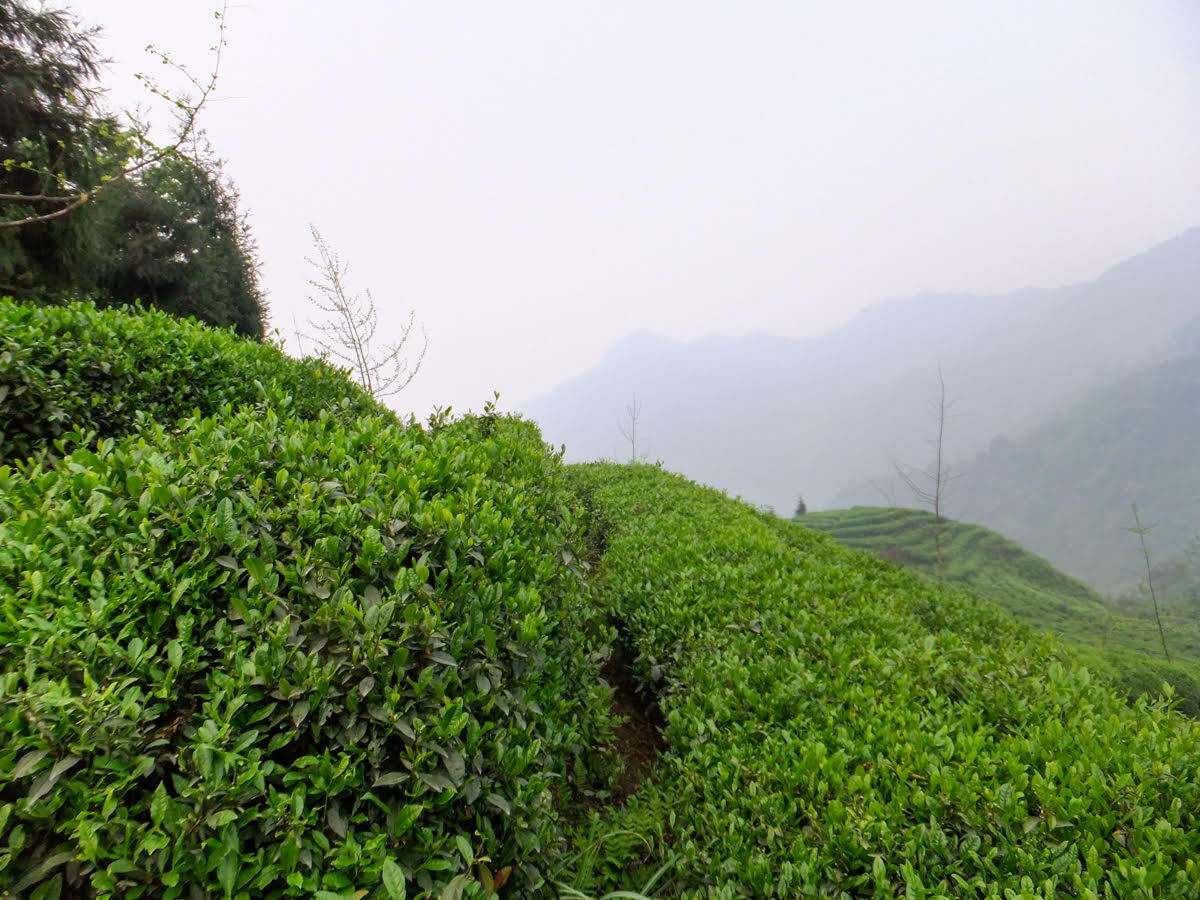 Zhu Ye Qing first appeared in tea history in the early 1960s. Its creation is attributed to a monk who lived on top of Mount Emei. In 1964, the government minister Chen Yi gave the tea its name, meaning “Green Bamboo Leaf,” during his visit to the mountain’s oldest temple, the Temple of Ten Thousand Years.

Mount Emei, where Zhu Ye Qing is grown, is one of Buddhism’s four sacred mountains in China. The first Buddhist temple to be built in the country is located there, as well as many monasteries that draw thousands of pilgrims each year in search of religious revelations and mystical experiences. The Sea of Clouds, which shrouds the landscape between the rocky peaks, and the famous Buddha’s Light, an amazing light-refraction phenomenon, have made this area a popular tourist destination.

Tea gardens have been cultivated on Mount Emei’s slopes since ancient times. We have always noticed that the people of Sichuan, in both the cities and the countryside, consume a peculiarly copious amount of tea, far in excess of the citizens of other Chinese provinces. In the streets and in the many teahouses, green tea is still served in large gaiwan rather than in glasses, which has become customary elsewhere in China.

Due to Sichuan’s wet, sub-tropical climate, teas can be plucked and produced relatively early in the year. The first harvests usually begin in mid-February, which is why the first spring teas available on the market often come from this province. Zhu Ye Qing is the best-known Sichuan green tea. Its dark green leaves are flattened and stylishly formed. Connoisseurs will often infuse this tea ina glass just for the pleasure of observing their smooth lines and down-free clarity. Zhu Ye Qing is indeed one of the Chinese green teas that is the most beautiful to observe.

Many pilgrims visit Mount Emei to contemplate Buddha’s Light while savouring the brisk flavour of Zhu Ye Qing. The remarkable spectacle unfolding before their eyes naturally leads them to endow the tea itself with mysterious and sacred qualities.

An interview with Ms. Zhou, a tea producer

We met this producer (pictured right) during our first exploration of Sichuan while searching for Zhu Ye Qing. Surprised to see a woman in her thirties heading a family tea company, we find out more about her vision of Chinese tea production. 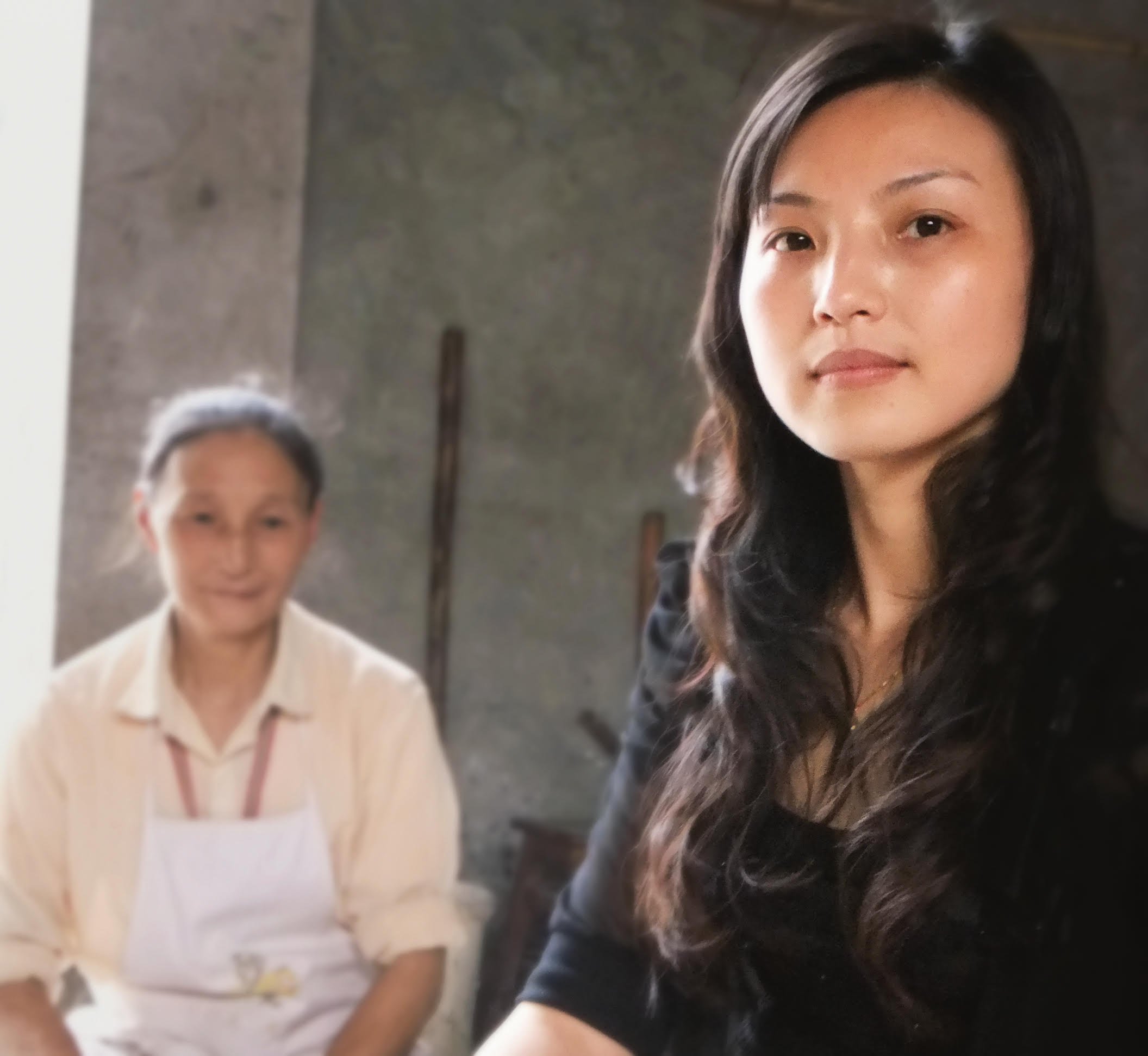 How long has your family been working in the world of tea?

My grandfather was a businessman who produced and sold tea. My father grew tea solely for personal consumption. When I began in 1996, everything was done by hand. I hoped to make a living from it. Today, we have a semi-artisanal factory and the entire family participates in the company. My parents live in the countryside and manage everything related to the harvest and transformation of the tea. My brother, sister, and I take care of the sales.

Is it difficult o be a woman in the world of tea?

There are still far more men than women in the world of tea, but this is not always a disadvantage for me. Physically, it is very demanding work, especially when the days are long and you still have to take care of all sorts of commercial issues. It is in moments like this, however, that a woman is often more meticulous and patient.

Do you prefer experimenting with tea or continuing the tradition?

I like experimenting with new teas. In addition to my main tea, Zhu Ye Qing, I am developing other teas similar to Bi Luo Chun, Long Jing, Huang Ya, and Bai Hao Yin Zhen.

In your opinion, what will the world of tea be like in China in ten years?

I think that more and more young people of my generation like to drink tea. Many tea-flavoured products, such as mooncakes, candies, and sunflower seeds, are also very popular with youth. As I see it, tea is currently in a major expansion period in China. The Chinese are just beginning to take advantage of a more comfortable lifestyle. Since 2004, the tea market has experienced amazing growth. In ten years, I believe it will be even bigger.

Legendary tea of Sichuan, from gardens situated at 800m altitude on the slopes of the magnificent Mount Emei, one of four sacred Buddhist mountains in China. The infusion of its glossy leaves exudes a heady vegetal (snow pea) and floral bouquet.

Produced in Du Yun Mountain within the province of Guizhou (China), Bi Luo Chun tea is made from extremely fine plucking where tender young buds make up most of the harvest. It is skillfully transformed by Mr. Li’s hand in traditional woks in very small quantities.

A worthy representative of the great teas of China, this white tea consisting purely of buds catches the eye at first sight.